Welcome to the Oakhurst Railroad! 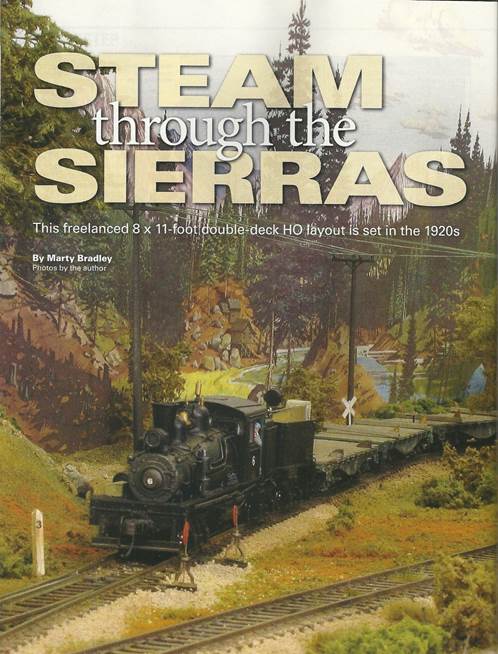 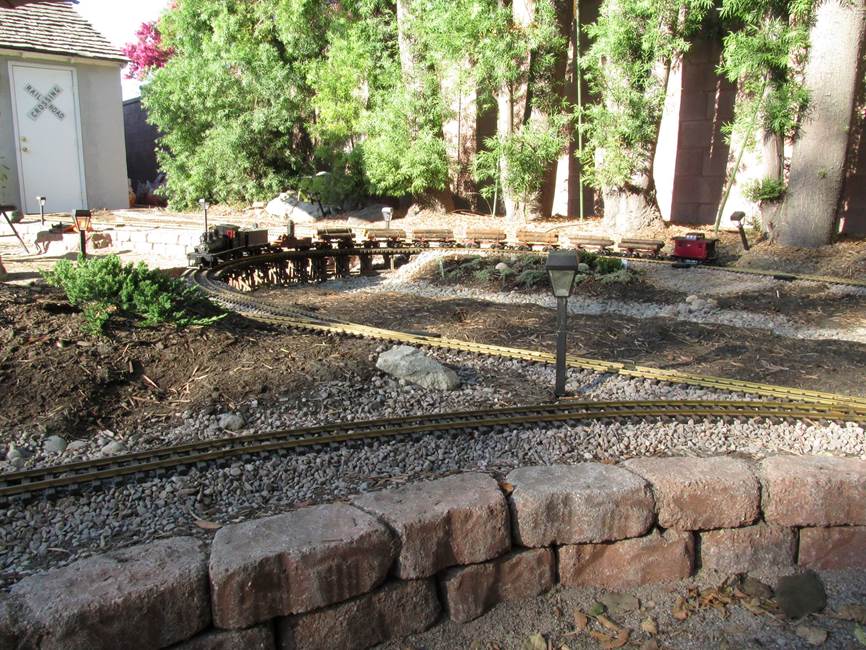 1) Look for the Oakhurst Railroad in the July 2016 issue of Model Railroader!!!!

4) The Oakhurst Railroad will particpate in the local NMRA Convention on Septmber 21st and 25th.  There will be an Open House/Layout tour on Sunday September 25th from 12-4:30 PM and BOTH layouts (HO and G-gauge) will be operating! 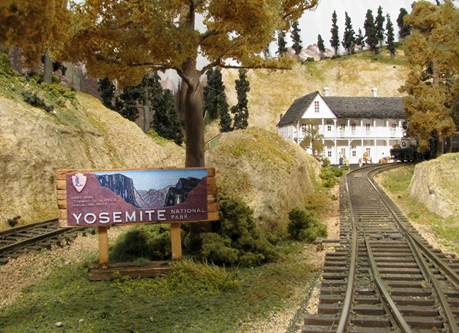 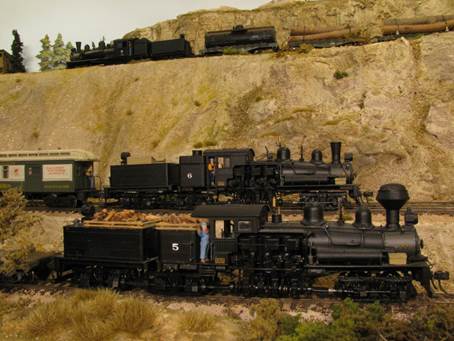 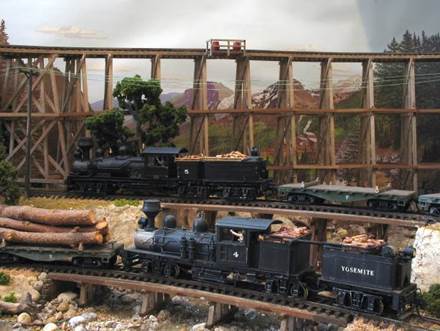 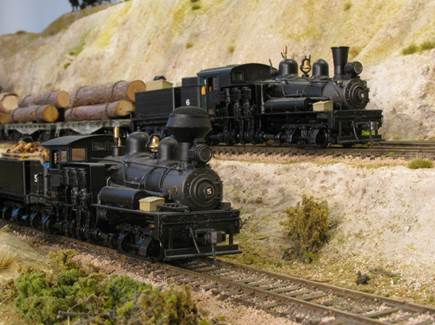 The Oakhurst Railroad is an HO scale model railroad running through the central Sierra town of Oakhurst, California. Although no real railroad ever ran through Oakhurst, the area is rich in logging and gold mining history and several railroads and logging flumes operated nearby. My parents and brothers used to live and work in Oakhurst and I spent many summers there. After about 20 years of planning and dreaming, my son and I built the first Oakhurst Railroad in the garage at our previous house in Downey.

In 2004 we were house shopping in the Los Alamitos/Rossmoor area and spotted our new house.  I was quick to find the “office” that a previous owner had built into a portion of the garage.  My wife Nancy was thinking kid’s playroom/junk room but that idea never had a chance.  We made a quick offer on this house and it was accepted.  The next day I bothered the sellers by asking to take measurements of the new “train room”. I spent the escrow time planning the track plan and layout arrangement.  By the time we moved in, finished unpacking, and fixing a few things, I was ready to start construction of the new Oakhurst Railroad.  Within about 3 months, trains were running.  About 3 months later, basic scenery was in place.  Since then I have slowly been adding details to the layout. 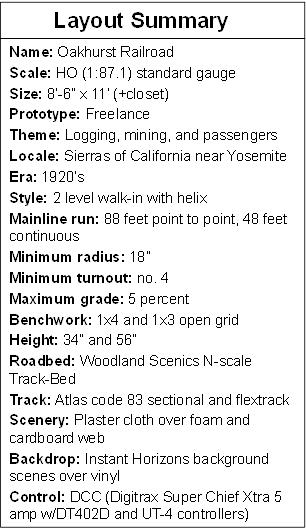 The Oakhurst Railroad is a two level point-to-point railroad with a helix and an optional continuous run.  For operations, trains are put together in the Oakhurst yard and then travel to the logging or mining areas on the upper level.  Logs are taken from Camp 3 or Central Camp to the North Fork sawmill.  Cut lumber and mining ore are taken to Oakhurst for interchange with a Southern Pacific branch line that connects to the mainline in Fresno.  Passenger trains take guests to and from the Yosemite resort in Wawona.

I hope you enjoy your trip on the Oakhurst Railroad! 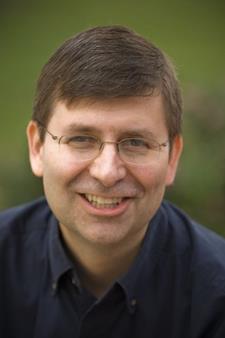 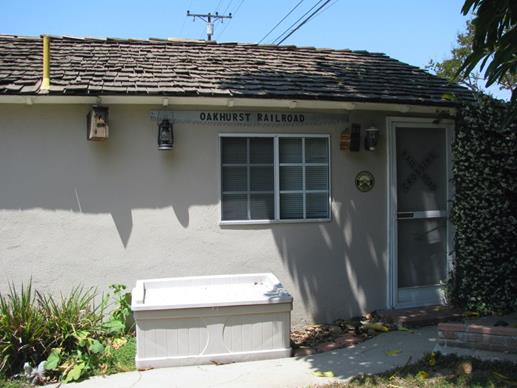 3) The Oakhurst station building and most of the businesses in Oakhurst have been replaced with Campbell kits, specifically altered to fit in their locations.  Fantastic structure modeler Bob Grech constructed and detailed them for me and they turned out great!

1) The Oakhurst Railroad was open for visitors as part of the 33rd Narrow Gauge Convention (http://www.33rdnngc.com/) on Saturday August 31st 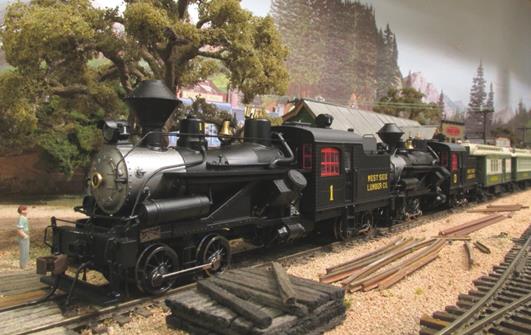 2) Many visitors for my 50th Birthday Party.  Thanks for coming by!

3) 5th Operating Session was held Friday June 29th at 6:30 PM. If you are interested in participating in future sessions, please contact me.

4) All locomotives, except old # 1 have been converted to oil burners.  Only #1 is still a wood burner. 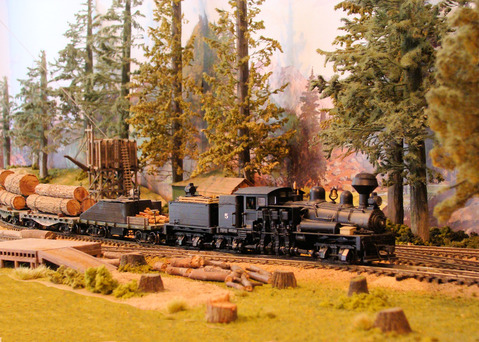 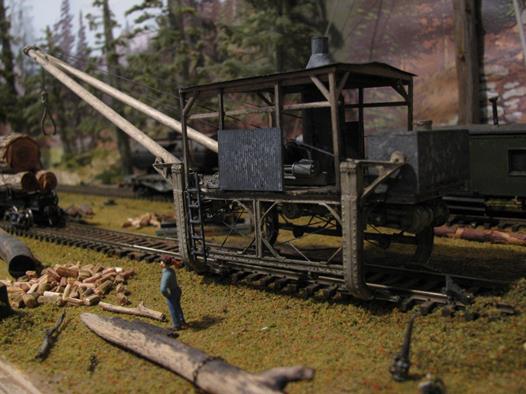 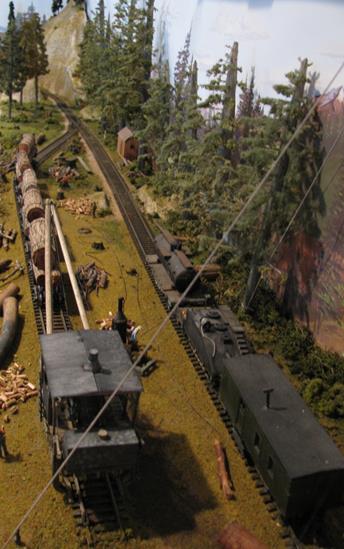 I rearranged and greatly improved the logging rigging at Central Camp using pulleys and other hardware from Rio Grande Models Ltd and grey Berkshire Junction E Z Line. It was difficult to get good photos of the rigging, but take a look. I have installed a high line and a log loading rig. Also built a craftsman steam donkey kit and added it to the scene. 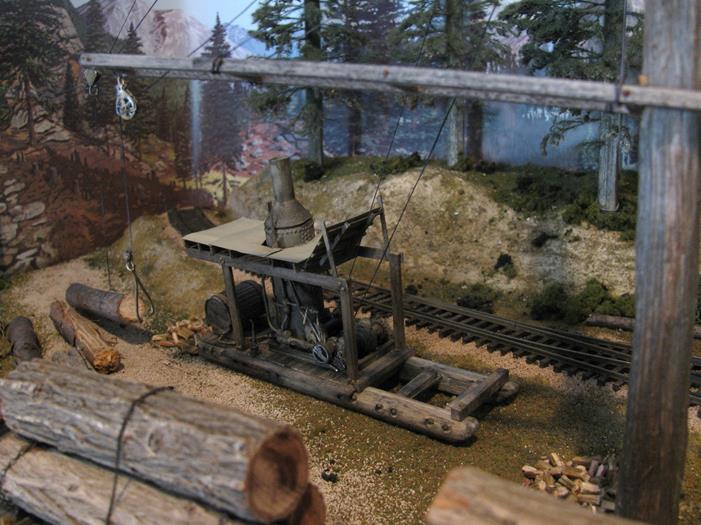 1) Check out the new Oakhurst Railroad page on Facebook

2) Three formal operation sessions were held in July, August, and September 2011.  They were a great success, at least judging by the comments of the operators.  If you are interested in participating in a future operating session please contact me. 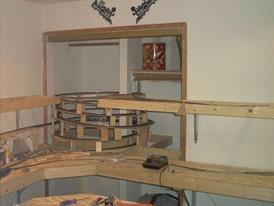 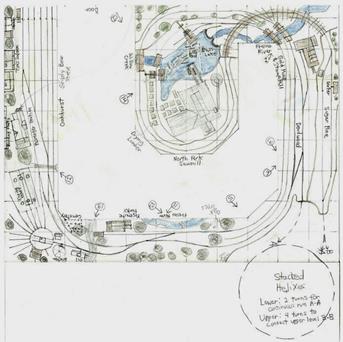 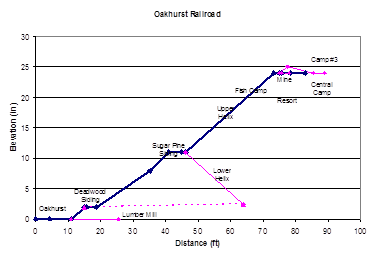 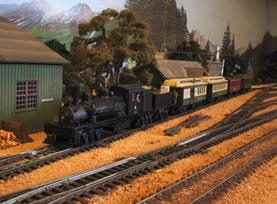 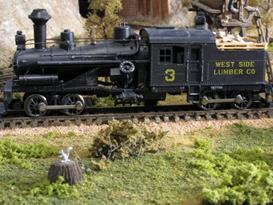 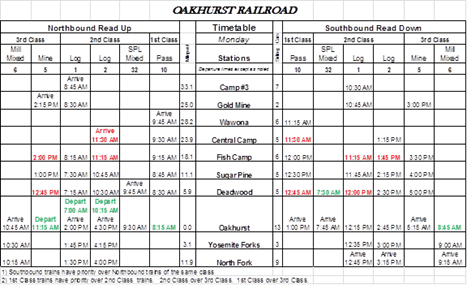 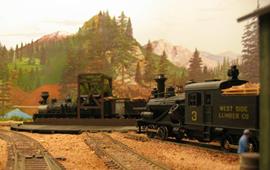 Pictures and discussion on how I added a gallows to the Atlas turntable:  Turntable Gallows Construction 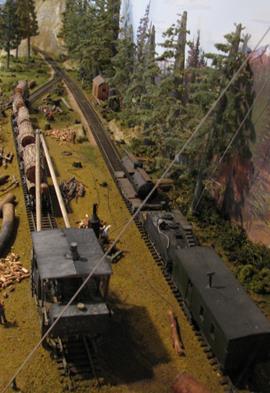 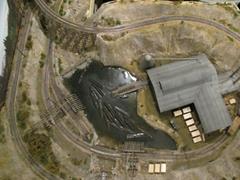 Other pictures of the current Oakhurst Railroad:

Link to pictures taken by a visitor at the February 2011 Open House tour:

Link to the model railroad club where I am the superintendent of the Sequoia Pacific logging branch: 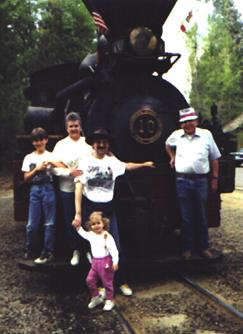 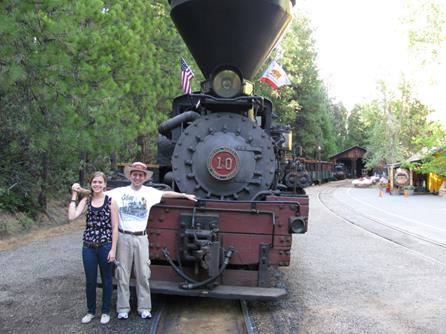 2) Johnson, Hank, “Thunder in the Mountains – The Life and Times of the Madera Sugar Pine Company”, 1995.

16) Johnston, Hank, “Railroads to the Minarets – The Story of the Sugar Pine Lumber Company”